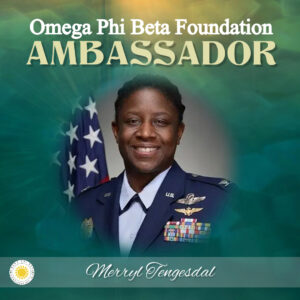 Colonel Merryl Tengesdal, 2022 – current, is the first and only African American woman to fly the United States Air Force’s U-2 spy plane which is used for specialized high-altitude reconnaissance missions. Merryl Tengesdal is a military veteran and former Director of Inspections who served for The Air Force Inspector General from October 2015 through August 2017.  A retired United States Air Force Colonel, Tengesdal served in the Iraq War and the War in Afghanistan. A native of The Bronx, New York, Tengesdal is a graduate from the University of New Haven with a Science Degree in electrical engineering. She was one of three women to make it through the program. After Officer Candidate School commissioning, she began a career as a Naval Aviator by flying the SH-60B Seahawk Helicopter at Naval Station Mayport, Florida. Her former Navy flight instructor, Commander Ron Robinson, has said that Merryl David (maiden name) “was one of my best flight students, and it doesn’t surprise me that she’s doing so well.” Once she completed her Navy obligation, she continued her military career by transferring over to the Air Force to fly the Lockheed U-2S Dragon Lady at Beale Air Force Base in Northern California. Tengesdal retired from the Air Force as a colonel. In 2021, Tengesdal competed on the second season of the CBS reality competition series, Tough as Nails. Most recently, Merryl Tengesdal wrote a book about her life, “Shatter The Sky: What Going To The Stratosphere Taught Me About Self-Worth, Sacrifice, & Discipline”. She is currently touring and doing book signings.

Ode “PHNX” Hoppie, 2020 – current –is the Director of Student Life ad Middlesex County College. Since 2011, Ode has been working in the Student Life office at The College overseeing events being held on campus grounds and overseeing all college club organizations and meetings. Ode is also the Creator of PHNX and the Make Party Movement, contributing to podcasting and DJ’ing music. In addition, Ode and his Fiancé Vicky are the stars of The You Me We Podcast, an older millennial couple discussing parenting, personal issues and a dash of pop culture. In addition to all of these hats Ode wears, his top role is that of a Father. 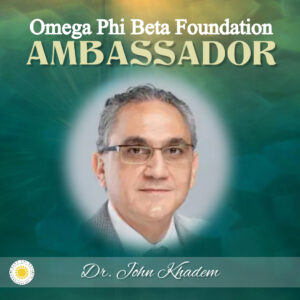 Dr. John J. Khadem, MD, MPH, 2021 – current – Dr. John J. Khadem, MD, MPH is a board certified Ophthalmologist, who specializes in diseases and surgery of the retina and vitreous. After completing his bachelor’s degree at Duke University, he received his medical degree from Columbia University, College of Physicians and Surgeons, in New York City. After an internship in surgery, and subsequent residency in ophthalmology at The University of Chicago Hospitals, he received surgical and clinical training in fellowships at Harvard Medical School and the Massachusetts Eye and Ear Infirmary. Upon completion of his training, he was invited to teach and held both teaching and research appointments at Harvard Medical School. He began his own practice in 2002, where he is continuing to treat patients suffering from a variety of retinal conditions. Currently an Assistant Clinical Professor of Ophthalmology at New York University, Dr. Khadem is a member of the American Academy of Ophthalmology, Association for Research in Vision and Ophthalmology, and the American Society of Retina Specialists. He has authored numerous peer-reviewed research articles and has been involved in a wide array of research, the most recent of which discusses stem cell implantation for the treatment of macular degeneration. Dr. Khadem holds patents with the University of Chicago and Harvard University on biological tissue adhesives. Dr. Khadem firmly believes in the healing power of an empathic, caring relationship with his patients. Every member of Retina Specialists is asked to follow this ideology that their interaction with the patient can help to accelerate healing. Dr. Khadem is affiliated with New York University, New York Eye and Ear, North Shore University, Long Island Jewish, and Bellevue Hospitals in New York. 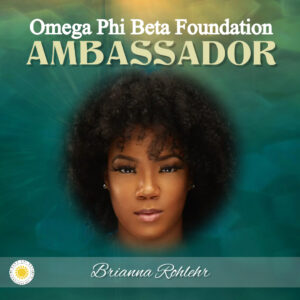 Brianna Rohlehr, 2021 – current – Born and raised in New York, Brianna’s passion for visual arts began when she received her first digital camera at the age of 17. Continuing to build on this passion she later went to Lehman College in The Bronx, New York to pursue a BA in Film & TV Studies. While at Lehman, the passion she had, quickly transformed into a focus for television production after landing her first internship at BronxNet Community Television in 2014, also conveniently located on Lehman’s campus. At BronxNet, Brianna was able to significantly build her technical skills as she held a variety of studio production positions, including studio director, floor manager, camera operator in addition to serving as a videographer/editor for field productions. She also served as BronxNet’s Intern & Studio Coordinator where she both recruited and trained high school and college students in all aspects of studio and video production. Building on her experiences at BronxNet, Brianna has interned at News 12 Westchester, has served as a production assistant for a variety of video projects, short films, television shows, most recently worked as a freelancer for CNN’s Headline News as a freelance production assistant and occasionally freelances for The Apollo in Harlem and The Grio. Presently, Brianna is working within her own independent production company, Brianna Rohlehr Visuals LLC, as a multimedia creative and enjoys any opportunity that will allow her to use her vision and creative abilities. In the meantime, she hopes to continue to connect with more creatives in order to produce content for small, large and new platforms, businesses and more. 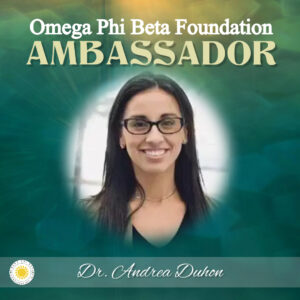 Dr. Andrea Duhon, 2021 – current – Dr. Andrea Duhon is a native of Bogota, Colombia. She is a 2005 graduate of North Carolina State University, where she obtained BS degrees in mathematics and mathematics education. While at NCSU Dr. Duhon co-founded the first organizations geared towards Latinx Students, such as Mi Familia, La Raza de Mil Colores (now Sube Ritmo) and The Rho Chapter of Latinas Promoviendo Comunidad/Lambda Pi Chi Sorority, Inc. Dr. Duhon is also a member of Phi Beta Kappa, an organization which honors exceptional academic achievement in the arts and sciences. Dr. Duhon also co-founded the Latinx Alumni Network in 2017. She earned master’s degrees in mathematics education and philosophy from New York University and a doctorate in mathematics education from Columbia University. Her passion for education and creating opportunities for need-based children has led her to contribute to programs through participation in various non-profits including the Art of Stepping Foundation, the Chris Duhon Stand Tall Foundation, and the HOME Charter School. She was also the Founder and Director of the Triple Threat – Dance, Step and Cheer Camp, a camp that provides exposure to the early stages of the arts for underprivileged children at no cost. Dr. Duhon is currently an assistant professor of mathematics at Marshall University. 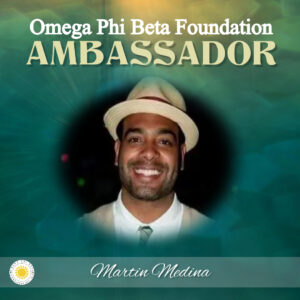 Martin “Marty” Medina, 2021 – current –Martin “Marty” Medina has over 20 years of design experience. Marty’s work is guided by a strong belief in design as a problem-solving tool, as a way of recognizing and forming relationships between ideas and reality, and as a method for improving the connections between people and the products they use. While building his skills as a designer, Marty has taught art at the Boys and Girls Club in the lower east side of Manhattan, New York, for 11 years. While working as a teaching artist, he was also the go-to designer for NYCHA, creating marketing materials for community operations and special events. Marty also founded Why Not Care, a not for profit geared towards providing beneficial resources to homeless and at risk families in low income communities. Marty also created the Why Not Care LES United Festival, with the purpose of pairing community resources and back to school needs in one event. This festival has distributed over ten thousand book bags to the community in only its fourth year. In addition, Marty created a free entrepreneurial program named Growth and Goals, and has been hosting since 2016, the same year he launched Why Not Care. This free entrepreneurial program consists of courses that bring community business owners, who are experts in a field, to facilitate these workshops and give expert advice to the same community they originated from. In addition to the community work, Marty is continuously coming up with new and innovative ways to engage people, in hopes of inspiring change in the community. He recently launched CARE ALONG THE WAY, a company entirely geared towards inspiring people to care more about their personal goals and impacting their community. The main product is the CARE ALONG THE WAY cards, filled with motivational quotes and tips on how to strategically make a difference in a community, authored and illustrated by Marty. 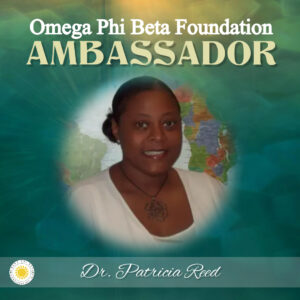 Patricia Reed, Ph.D., CSP, 2021 – current – Patricia Reed, Ph.D., CSP, who hails from Philadelphia, PA originally and lives in suburban Houston with her family, is a Safety and Environmental Engineer at Honeywell. Patricia previously worked for four years at a specialty chemical manufacturer for household and commercial products that was under the jurisdiction of OSHA PSM and EPA RMP. At this site, Patricia managed PSM and RMP initiatives for extremely hazardous substances (chlorine) and ensured compliance with the US Department of Homeland Security (DHS) Transportation Security Administration (TSA). Patricia also worked for sixteen years prior to this in the oil and gas industry on the upstream fabrication side and she also worked on the downstream side in specialty chemical manufacturing. Patricia is a Doctor of Philosophy, Safety Sciences, receiving her Ph.D. from Indiana University of Pennsylvania. Patricia is a professional member of ASSE since 1997. 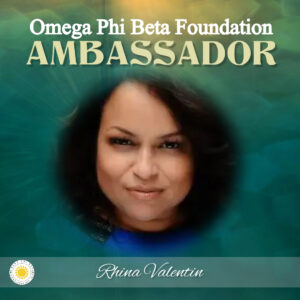 Rhina “La Reina” Valentin, 2020 – 2021,  is the Founder and Creative Director of La Reina Del Barrio Inc. and the creator of COLORS OF RHINA, a variety television show.  A “Jane-of-all-trades” in the arts and entertainment industry. She is a Mother, Television Personality, Comedienne, Writer, Dancer, Producer, Director, & Choreographer. As a multiple award winning performance artist, Rhina has captured audiences with her humorous style while simultaneously demonstrating her innate ability to touch upon the realities of life. For more than a decade, she has been the popular hostess with the mostest as the infamous Cafe Con Leche Television personality for the award-winning talk show “OPEN Friday” on BronxNet TV.

OPBF Celebrates An Impactful Year in 2022

OPBSI’s Ray of Hope Announces $22,000 Raised for Organizations Working to End Violence Against Women in Our Communities

OPBSI’s 2022 efforts included 29 events during a Month of Action, including a Dominican Republic expansion spearheaded by the Omega Read More

OPB Foundation partners with OPBSI on RAY OF HOPE

Sorry, no Tweets were found.